As Malden is becoming more urbanized, the city is welcoming more shops and businesses with the renovations that are being made — especially in Malden Square. Malden has recently welcomed the Ono Pokebar restaurant, located on 7 Pleasant St. within Up Tea Hub.

On their menu, there are various bowls to choose from, such as the Ono Special Bowl, Teriyaki Chicken and Shrimp Bowl, Hawaiian Classic Bowl, and many more.

Toni Chen, the owner of Ono Pokebar, explained that he has opened a few poke restaurants in Massachusetts throughout the years. Chen mentioned that in 2017, “[he] opened his first poke bar in Cambridge called Poke City.” Along with just last year in 2018, he opened another one called Poke Garden in Brookline. 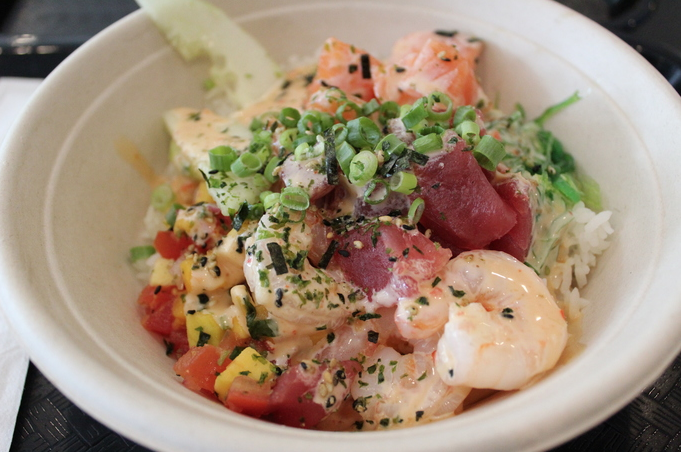 Due to the success and positive reviews that Chen has been receiving from his restaurants — especially from The Boston Globe who wrote an article on Poke Garden — he decided to open one in Malden because of the “location, as it is close to the high school and is near many other businesses.”

Chen mentioned that “since poke is a popular, beautiful dish,” he believed that opening poke restaurants would be a great idea since “younger people enjoy it.”

He stated that the reason behind his success may be due to how he only uses the freshest ingredients including tuna. He mentions that he buys it from South Boston, in comparison to others who use the frozen kind.

Junior Suiyenah Chen, who works at Ono Pokebar, shared that “[she] has always wanted to work at a food or drinks related job” and so working at a poke bar was perfect for her.

Adding on to that thought, Junior Jimmy Ton, another worker at the poke bar, expresses that while he is working, he enjoys hearing people’s reactions to the poke bowls because they “put a smile on the customers face,” as it is an intriguing dish with an appealing vision.

Ton recommends that new customers build their own bowl since “the workers walk you through the steps and is filled with whatever you want and feel comfortable with.”

Sophomore Jennifer Wong, who recently tried the new poke place, explained that she was pleased by how customers had the option to customize their bowl and especially have the opportunity to “choose exactly what [she] wants from the different toppings they offer.”

In the future, Chen is planning on taking Ono Pokebar to the next level as he plans to add more to the menu, such as marinated toppings. In addition, he wishes to turn the restaurant into a delivery service using ubereats. With that in mind, he also intends on opening another poke restaurant in Cambridge.

Ono Pokebar has a wide variety of poke bowls and different flavors and it is highly recommended that anyone tries it out.

Sandra Li is a sophomore at Malden High School, and it is her second year as a reporter on the Blue and Gold staff. Li initially joined the Newspaper because she was interested in being a helping hand in the community.” Her favorite part of the class is being able to interview and meet new people. Her goals for the year are to be more active and write more articles for the class. For fun, Li likes to bullet journal. She also listens to K-Pop and enjoys watching the TV show Friends. View all posts by Sandra Li