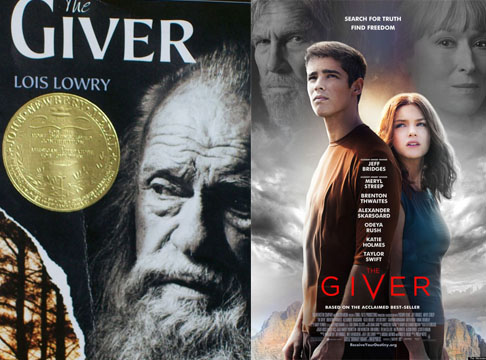 You have most likely heard of the title “The Giver”  at least once in your lifetime whether it was from reading it in middle school or a younger sibling reading it now. The 1993 novel written by Lois Lowry is a popular American novel often read by young adults. The Giver has sold more than 10 million copies and won the 1994 Newbery Medal. The book is about an Utopian society, following a boy named Jonas through his 13th year of life. In this society, they have eliminated all emotions such as pain, happiness, sadness, and love because society leaders felt that the idea of uniformity would be the safest for their people. When children turn 13, they are assigned the jobs that they will have for the rest of their lives. Jonas is chosen as the Receiver of Memory which is a position where he has to receive all the memories of their society before there was “sameness," given to him by the current Giver. Jonas learns the truth about his society and struggles when realizing that his entire life has been a lie.

I really loved this book, in fact, it was one of my favorite books that I read in middle school. It is a great novel to read if you are looking for a story about trust, courage, and love. Towards the end of the book, I felt myself getting attached to many of the characters such as Jonas and Gabe, who is the child that lives with Jonas’ family because he was not fit enough to be given a new family yet. It really made me think about the world that I live in, and how different it would be to live in Jonas’ world. It also made me realize how awful it must have been for Jonas to figure out how he was missing emotions his entire life. I truly loved the ending of the book because it left the reader to create their own idea of what happened to the characters you had grown so close to.

The movie adaptation of "The Giver" has been talked about for the past few weeks. Director of "The Giver", Phillip Noyce, shows more of a vague story in the movie rather than digging deep on what it is really about. There were various scenes that were added and  scenes that were not included. For example, if you watched the movie without reading the book you would describe "The Giver" more as a love/adventure film rather than it being a book with a purpose. For example in the book Jonas has these "stirrings" for Fiona after being chosen as the next giver, but in the movie it is taken to a different level. They actually experience a physical moment with one another when they kiss, which did not occur at any point in the novel. The movie did show many scenes with purpose and actual events from the book, but not entirely. Of course directors have to keep  movies alive and interesting, but one can also do that by including important scenes from the book. In my personal opinion the movie was very entertaining to watch, the only thing that really angered me were the unmentioned events in the book that gave the book purpose. I would recommend to watch “The Giver” but only if you have not read the book, otherwise, it will pale in comparison to the novel. Overall, both the movie and book were amazing and I would read and watch both again whenever I could.