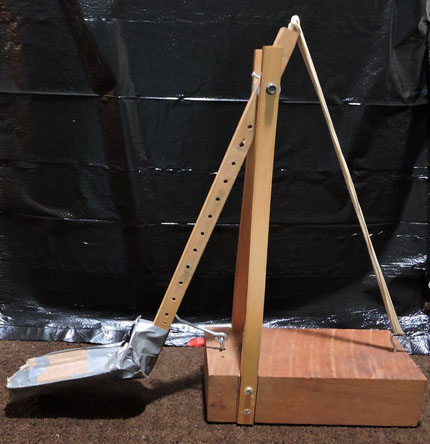 Throughout history, jobs in science have been dominated by men. Although progress has been made with more women occupying scientific jobs, a recent study published in the New York Times has shown that “physicists, chemists and biologists are likely to view a young male scientist more favorably than a woman with the same qualifications.”

This is why events such as the “Women in Science” competition are so important: they promote an interest in scientific activities, promote communication between girls who share the interest, and introduce them to inspiring women scientists.

“There were four parts to the event,” Morrison explains, “three [of them] were challenges and [there was] the catapult challenge.” The first challenge, he continues, was “to build a scale using known masses and [the team] had to mass an unknown.” The second challenge included puzzles and ciphers. Then, the third involved comprehending knowledge from “all scientific fields.”

The final challenge involved a catapult that all teams had previously built. The MHS team, with the help of Morrison, Kumar, and Bazzinotti, constructed their catapult out of a wooden crutch. Then, once they had their catapult ready, had to launch a small ball five to fifteen meters.

Although the day of the event consisted of many exciting things, Forestier says her favorite was the “Conquer the Wall” challenge, which was the challenge with the catapult. Forestier said that she and her group “worked really hard building a contraption that would be able to launch a stress ball and knock down targets.” She is also proud that they did, “much better than [they]  expected and [that their]  hard work was paid off.” However, Prum’s favorite part of the day had to be “lunch time because [those in charge of the event] put [them] in groups alongside a woman who worked in the scientific field.” Prum also added that the woman explained “what it was like in that part of the [scientific] field,” and that she “found it rather interesting getting to learn about all the possibilities that were involved when going into science, especially as a female.”

As for the idea of women in science, the event has definitely helped these MHS students and teachers to even more firmly attest to the ever-present need. Kumar believes that the event was put on because “females are still

Forestier hopes to “pursue a science related job when [she gets] older.” She says that the event has helped show her “how many young women like [herself] have a love and passion for science.”

Also the fact that the girls were able to meet other “teenage girls [their] own age and talk to them about their interests,” and that they were, “able to talk to mentors who have worked in the scientific field.”

Prum believes that the event has helped her “become more aware of the role women have played in science.” She says that in school there was never much focus on women and that “you saw that this guy did this or that [one]... found that.” However, her participation in the event showed her that “women did [more in science] than [she previously thought]”.

The “Women in Science” event is an opportunity for girls to realize how much women can actually do in the scientific field. Forestier believes that “more and more women are going to be entering the science field and the ratio of men to women will become equal.” Kumar, Morrison, and Bazzinotti all agree that if someone is considering a science related job then they should “research a wide range of topics [or] specialties before going to college.”

Now that MHS is acquainted with the “Women in Science” competition, as long as people are interested, MHS can participate every year. Prum encourages “any girls who are even the slightest bit interested in science [to] take part,” and added that it is a “wonderful and new learning experience.”

An earlier version of this article was published on Dec. 22n, 2014 with misspelling of Somantha Prum's name as well as some other errors. This was revised and updated on Jan. 7th, 2015.