Italian-Algerian director Luca Guadagnino’s recent claim to fame has been the film Call Me By Your Name, an independent so-called “coming-of-age” romance that follows the life of 17 year old Elio Perlman and 24 year old Oliver (whose surname is never revealed), played by Timothée Chalamet and Armie Hammer respectively. The film had become so popular to the point of its release date here in Boston, that the film was sold out for its first showing on opening night; my pre-ordering tickets saved me the disappointment of having to make it to another showing.

Despite my built up anticipation which led to inherent heightened expectations of the film, I left the theater yearning for more from this flat-line cinematic depiction of such viscerally beautiful literature. In fact I felt a bit cheated because the film had the potential to be so much more powerful. As always, so much was sacrificed from the book-to-movie process and viewers who only knew the story from the film will never experience the true robustness of this story as it was on its pages.

The film takes place and was filmed in Italy, the novel even had Italian dialogue interspersed throughout the novel too. Naturally, I was surprised when the film’s main non-English dialogue was instead in French. My first thought was that this was done to feed into the zeitgeist of many French independent films. I thought it would have been a precedence if the film were to feature Italian, as it not often done in mainstream cinema in America but I brushed it away by thinking that a potential justification for this was that Chalamet simply may have known better French than Italian. 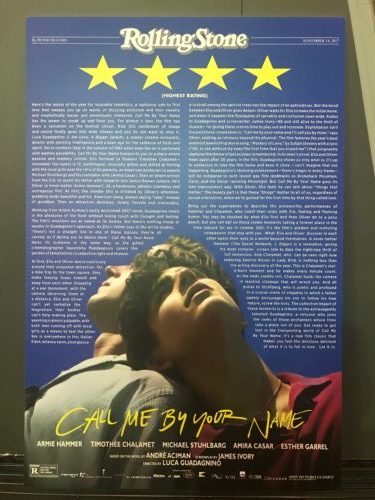 Additionally, this was the first time that I felt that a movie was physically moving so much faster than the book, yet sitting in that theater felt like a lengthy ordeal. It felt as though the the raw and cathartic scenes in the novel that I cherished were being parroted back at me on screen simply for the sake of its inclusion, there seemed to be no heart behind it.

It felt that these two characters and their summer dalliance was chronicled only to humor its audience and to show that a same-gender relationship was okay, viable even. I believed that the film succeeded in doing this, but mainly in a way that ensured that the audience remained comfortable throughout all of it. There needed to be an extra layer of comfort especially given that Elio was still considered a minor and Oliver was a fully grown, matured, adult. American films have conditioned their viewers to get comfy with a bowl of popcorn in hand to watch cisgender, straight, white men, heralded on screen. The fact that these two characters sho

wed same-gender attraction would, apparently, flip this commonality on its head entirely. But still, these characters fit the conventional paradigm of male movie stars, so was this portrayal truly revolutionary?

This film was also indicative of society’s tendency to watermark any type of same-gender attraction as “gay”, a blatant ignorance of human sexuality as a spectrum. Both Elio and Oliver displayed attraction to women and men in the film, yet this film remained to be known as a gay movie by much of the public, because of course a swathe of same-gender attraction obviously denotes “gay”. In the same vein, the film was able to covertly normalize the fluidity of physical attraction instead of belittling the characters and their love interests into needless love triangles.

I will continue to cherish Call Me By Your Name in its book form, although its film release was monumental to film industry in its own right. It was a story circling two queer people which, a type of story that is still continuing to breakthrough in the film circuit, following the releases of notable independent queer films such as Moonlight, Carol, Blue is the Warmest Color, Pariah in the last few years.

Regardless of my personal qualms about Guadagnino's most recent release, the film has taught me to view cinema more objectively and think about how I can apply what I learn from each film I watch into my own potential narratives for the films I hope to make in the future.

Editorial From the Editor Homepage Opinion

This Cannot Be Real: The Denial of Senior Year