Erin Craven, who was born and raised in Reading Massachusetts, has been a faculty member at Malden High School since 2006. When first coming to Malden High, she started off as a Special Ops Guidance Counselor and then became the Boyle House Counselor in 2008 and remained in that position for the last 11 years before becoming a Guidance Director this year. 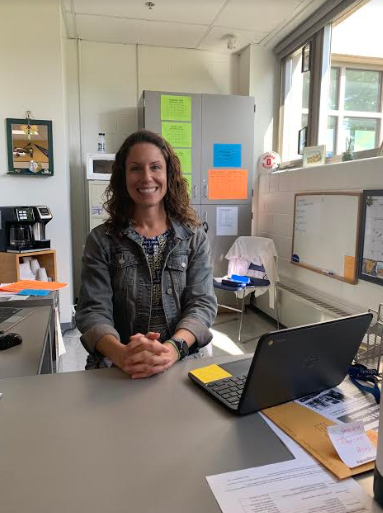 Craven studied as an English Literature major with a minor in Business Management. A few years after completing her undergraduate degree, she taught English at a ski academy in the White Mountains of New Hampshire and then decided to go back to school near that area to Plymouth State University. She then received her masters degree in Education with a concentration in School Counseling. It was after all this that she then came to Malden High.

Her position is similar to her last one but in comparison, she now obtains more responsibility and “works with all the counselors in the district, as opposed to just the high school team.” Craven also adds that while she will still be advocating for students and families, she must also now advocate for “school counseling and academic support at the district level.”

Early on in her career when she was still teaching English, she realized how much she loved it and then decided to take a class called “Introduction to the Counselling Profession” and says “it was an eye opener for [her] that made [her] realize that was exactly what [she] wanted to do.”

Craven’s main reason for wanting the job was because she “want[s] to try and help in a new and different way that will be exciting for [her] and hopefully for the students and families at Malden Public Schools.” As she takes on the new role, she is also prepared for the challenges she may face and with this being said, one of her goals for the year is to expand publicity.

Jenkins and Brunelli 9th grade Guidance Counselor Taryn Belowsky shares a relationship with Craven as they have been working together for the past eight years. When asked how she would describe Craven, Belowsky states that she is “passionate, motivated, energetic” and thinks she is “a wonderful person.”

In terms of Craven’s role, Belowsky agrees with her that the district is in need of more publicity. She thinks Craven will be “a great way to . . . advertise and advocate for the different programs and initiatives that [their] department does” and she thinks that in doing so, “everyone will be aware” and hopefully open to those opportunities.

Apart from this, Belowsky adds that Craven’s role also consists of “making new relationships with people outside the community that maybe [the school] is not connected to that could be utilized more by our students and our staff.” With this, she will also be “aligning some kind of vision with the middle schools,” since there is currently only one councelor in each of them, in which case Craven is preparing to collect a great deal of data on so that the guidance team can “continue to improve [their] services.”

Holland Guidance Counselor Caitlin Quinn, has worked with Craven for the last five years. When Quinn first applied to work at Malden High, she looked on the website and noticed that Craven had attended the same college as her at Saint Michael’s College. Quinn even reached out to her prior to her interview and thought it was “a nice connection” she could make with her and thinks she has been “a really great role model throughout [Quinn’s] time here at MHS” ever since.

Quinn believes that Craven is “a wealth of knowledge” and thinks it is especially important in regards to what the guidance team does and “what [they] do in terms of college readiness for students and [Quinn thinks] that is something all of [them] need to know...to prepare students for life after highschool.”

MHS has not had a guidance director for a few years and with the position now being reopened and filled by Craven, Quinn states that she likes “having another point person to speak on our and the students behalf.” She also emphasizes how it was a very “well deserved position” for Craven, as it is something she has been working really hard for.

Craven has created many special bonds with faculty, students, and specifically the guidance team. Holland Adjustment Counselor Kristy Hardy is one of them.  Hardy explains how she thinks the position “fits her well since [Craven] has been here for a long time and knows the ins and outs of guidance. It is also good that the team trusts her.”

Even though the school is taken very seriously, staff members still manage to have fun as well. Hardy mentions a story where she and Craven were discussing how they still know all the words to every song from The Little Mermaid and then they both broke into song. Craven was saying how she does not even know how she remembers all “the words coming out of [her] mouth.” They were both just having a blast.

In her free time, she also enjoys doing anything that involves the outdoors, which includes hiking, snowboarding, kayaking, gardening, etc. She also mentions her love for cooking different authentic recipes from different cultures. Since she loves being outside, she explains that the biggest perk in her new position is the window located in her room.

Overall, Craven is very excited to take on this position and thinks it is “good for families and students to have [her], Jayson Payeur, and Heather Northrop here. People that know here. You don’t stay in Malden Public Schools unless you love it and [they] love being here and it is nice having us be able to do that in new positions.”

Sabrina Monteiro is a senior and joins the Blue and Gold for her final year as Managing Editor of Web and Mobile Apps. She first joined the Blue and Gold because her 7th grade teacher involved her in blogging and she was also required to write free writes every night for homework, all igniting a passion for connecting to a greater audience. This is where her 8th grade counselor advised that she should develop her passion for writing, fashion, and decorating by joining the Blue and Gold. Since then, Monteiro has grown an appreciation for travelling with hopes to go to Paris and recently achieved this dream last year while also having gone to the Bahamas this summer. Over the past few years, Monteiro has enjoyed creating new relationships in an environment where everyone is interested in the same things and hopes that she can continue her passion for journalism in the future as a broadcast journalist. View all posts by Sabrina Monteiro

Submit your questions to the school’s favorite mascot anonymously here!