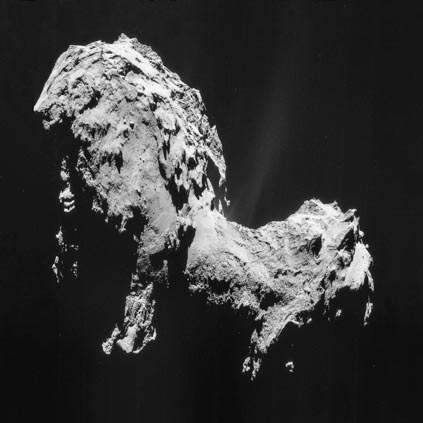 On Nov. 12, the Philae lander, after being released by its transport, the Rosetta Spacecraft, made its descent to the surface of comet 67/P. Upon impact, the lander was supposed to deploy harpoons to secure itself to the surface of the comet, however this system failed. This resulted in the lander bouncing off of the surface and landing back on the comet in a different location. This new resting place is for the foreseeable its last, as it is unable to get the sunlight needed to recharge its limited battery supply. Before its charge was depleted, it was able to relay some scientific data regarding the comet back to Earth, but it was unable to do as much or as intensive work as it was designed to do. However the landing was merely the beginning of the closing sequences for a mission started a decade ago and nearly 4 Billion miles away.

Approximately 10 years ago, the European Space Agency (ESA) launched an Ariane 5 rocket in French Guiana. For the ESA, the launch of a rocket is not uncommon, but this rocket carried something unique in its payload, the Rosetta Spacecraft in conjunction with the Philae Lander. The pair was destined for the orbiting comet 67/P with the mission of gathering scientific information regarding their target.Unlike previous missions involving comets, the ESA planned on sending a spacecraft to and landing on the surface of 67/P, and taking samples and data directly from it, a first for mankind.

People don’t normally think of comets as having any significance in our lives, other than the occasional spectacle brought about with one such as Halley’s Comet, but as Jean-Jacques Dordain, ESA’s director general, has said, “with Rosetta we are opening a door to the origin of planet Earth and fostering a better understanding of our future.” As they are free from the chemical and physical effects present on planets such as our own, comets provide an invaluable snapshot of the beginning of our solar system, and many scientists believe that they hold keys to the origins of life on earth in the form of complex organisms on their surface. This belief, in light of the newest reports regarding the data Philae transmitted back to Earth that contain signs of “carbon-containing organics,” seems to be gaining traction every day. The implications of such a discovery are vast, and could mean major advances in mankind’s understanding of the origins of life on Earth, and of life in the Universe.

Beyond this, the mission is proving, just as the Apollo moon landing mission did in 1969, that humanity has made a new step in technological capability. A feat of such magnitude could only have been imagined before, and now with the successful navigation of the Rosetta spacecraft over a 10 year period, future missions of equal or greater difficulty are conceivable and feasible. We can only expect to see more Rosettas in the future, and while many may fail to complete their original goal as Philae appears to have done, humanity will still be reaping the rewards of their ventures just as we are now.

For now, Rosetta will maintain its orbit around 67/P, collecting various data from above its surface. Those working on the mission hope that in the coming months, Philae will be able to charge its battery enough from sunlight to power up once again and begin the process of scientific research with more time and security. But even if it does not, the mission stands today as a  triumph for mankind and an opportunity for even further advancements.

Is Baseball Dying in America?