Without fail, the boys cross country team continues to deliver another amazing season for all of Malden High School to be proud of.  David Londino, boys and girls cross country coach and MHS English teacher, is extremely pleased with the amount of “effort the boys put in” which resulted in them winning the Greater Boston League championship title, along with a lot of individual achievements that the boys should be proud of.

Berilo expresses that he is extremely proud whenever he and his teammates get to “run at invitationals,” because it is the MHS team against dozens of schools who all trained throughout the season to get a “qualifying time,” to participate in that meet.

In order to prepare for big meets, such as invitationals and States, and in order to meet Coach Londino’s hopes to achieve goals, such as to become GBL champions and to “set a new team best at the state meet,” a lot of training is required. Wang describes practices as varying from “jogging long distance for forty plus minutes” and “speed workouts where you [push yourself to] run fast.” While the cross country course is a 3.1 mile race, endurance and speed building are both necessary in order to have a successful season.

According to Berilo, the hard work put in at practices, which are held Monday through Saturday, is “to build up endurance and muscle strength for all the meets.” Also, according to Londino, the team does “about 20% more volume than the girls,” but that is “the only difference” in their training regimes.

A big aspect of the team that is very clear to see is the strong bond they share with one another. The fact that they’ve all been “running together for so long,” seeing how most of the team runs indoor and outdoor track as well, is what has created this family bond among the team, expresses Berilo. Wang agrees that being apart of the team has provided him with a “second family.”

In the center of all of the quickly exchanged inside jokes, harmless teasing, and impish smiles that make the team so family-like is Coach Londino. Not only is he the glue that holds the successful group of runners together, he is also greatly respected by them as well. Berilo referred to Londino as “one of the best coaches in the school” and said that he “definitely knows what he’s talking about.” As for Londino, he “loves working with such a dedicated group.”

A great display of their success is the fact that the Boys Cross Country team won the GBL Championship meet on Oct. 25, 2014. Their immense dedication and rigorous practice also lead them to finish the season undefeated. For the GBL meet Senior Nahom Ghile scored in second place with a time of 15:46, junior Angus Mo scored third with a time of 15:49, junior Jonathan Solomon scored fourth with a time of 15:50, Wang scored fifth place with a time of 16:40, and junior James Ao scored eighth with 16:29. Coach Londino believes that the team’s “guys in the top five have worked hard” and have “improved their depth at the top.”

Through all of their hard work, dedication, and strong relationships with each other the team continues to improve and hopes to keep on doing so. Already,

Londino feels they improved so much because “rather than relying on a couple top guys, [the] 3,4,5 guys have stepped up to really close the gap,” and it provides the 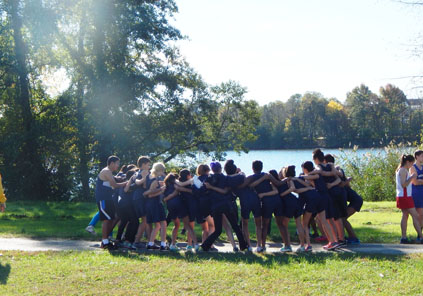 “team with more depth.” Although the team will continue to improve the departing seniors are sad to be leaving. Wang commented that being on the team made him think, “running isn’t so bad,” which is what “a lot of people think.” He, along with Londino, also encourage others to try out for the team. “cross country is a fun sport,” Wang encourages, “all sports are good [to try],” because you never know, “you might [end up liking] it.”

Malden Girls Softball Hits Season Out Of The Park