Malden High School’s Golden Tornadoes Football teams’ season is shortly coming to an end. With a record of 0-8, the team has had a tough season.

One of the senior captains Ishmael Sylus was disappointed with this season. It was not all Sylus had hoped it would be and explained that “[they had] potential” to have won some games, but stated “[they] are making the best of it.”

In one of their last games against Newton South, Malden pulled ahead of Newton in the second half. With nine seconds left in the game, Newton South ran the ball down the field and tied it, bringing the game into overtime. There had been four total overtimes before Newton South took hold of the ball and ran to the end-zone scoring the final touchdown in the game.  Sylus stated that this was the highlight of his season. “Even though [they] lost, [they] kept battling” he stated. Malden has had a couple of rough seasons, but Sylus is confident that “Malden football will be on top” very soon. He also believes that “next season will be [their] season to shine, even if [he is] not there.” 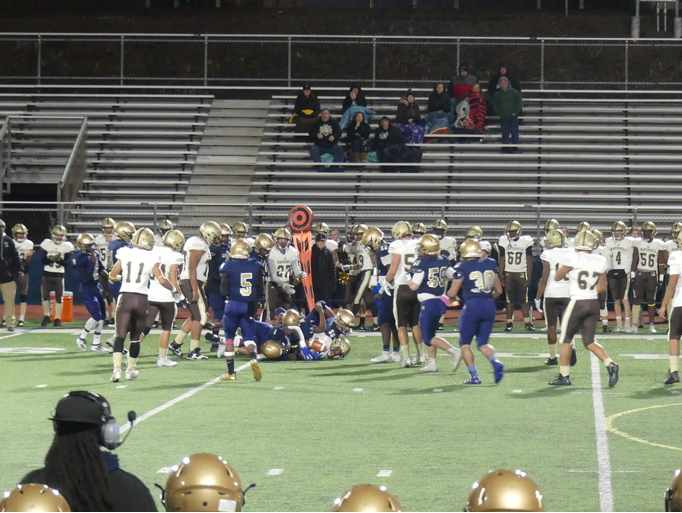 Malden's football team tackling a player on the Newton South team and everyone else running towards them. Photo taken by Courtney Fitzgerald.

Another captain on the team, sophomore Davenche Sydney, expressed his disappointment in how the season went, stating that “[he] was hoping for a winning season.”  Sydney also mentioned that he would have changed the “attitude and vibe” of the team in order to have a better season. However, Sydney shared that the highlight of the season, in his opinion, was “being tied with Everett” with a score of 6-6 at halftime.

Malden High School’s band plays during every game and some students have expressed how they love to go and listen to the band because they get the fans hyped up for the game. Sydney stated that he wishes the football players on the sidelines to be “hyped up” and bring more energy on the field, rather than “being silent.”

Malden had a few strong games and a couple of near victories. Overall, Malden had a fighting season and although the seniors will have to say goodbye, the rest of the team cannot wait until next year when they can get back onto the field and play once again together.

Courtney Fitzgerald is a sophomore at Malden High School. She joined the Blue and Gold because she was inspired by a creative writing assignment from seventh grade, and when it was mentioned to her in eighth grade that she could enroll once she entered Freshman year, it led her to want to join. Fitzgerald also enjoys photography, which is utilized in the class as well. This year, she hopes to improve on her interviewing and layout skills. Besides her joy for writing, she also enjoys dancing. She has gone to the same dance studio at Cheryl A. Sullivan School of Dance for eleven years. Some types of dances Fitzgerald enjoys are ballet, tap, jazz, contemporary, and pointe. Fitzgerald enjoys almost every genre of music, but her favorite genre is pop, and her favorite band is “Why Don’t We.” View all posts by Courtney Fitzgerald

Submit your questions to the school’s favorite mascot anonymously here!